The Role of the Arts

The real story of the Saharawis lies within rich oral traditions, where knowledge, wisdom and memory are embedded in their music, poetry and proverbs.

Decades of exile, however, have negatively impacted their oral traditions. A whole host of factors have conspired to disrupt the chain of cultural transmission between generations. Years of education outside the camps, economic pressures, TV, consumerism, and the growing dominance of technology and social media in the lives of the younger generation all play a role in this.

Today, a third generation of children are growing up more likely knowing the stories of Sleeping Beauty and Superman than their own traditional desert stories and know little about their homeland. Meanwhile, elders with real memories of life in Western Sahara are dying out and with them irreplaceable oral libraries of the past.

Conscious of this alarming trend, through our Desert Voicebox project, we have been tapping into local cultural resources like artists who can teach about traditional music and poetry, and we have been devising activities to ensure the children speak to their elders to learn about their past. 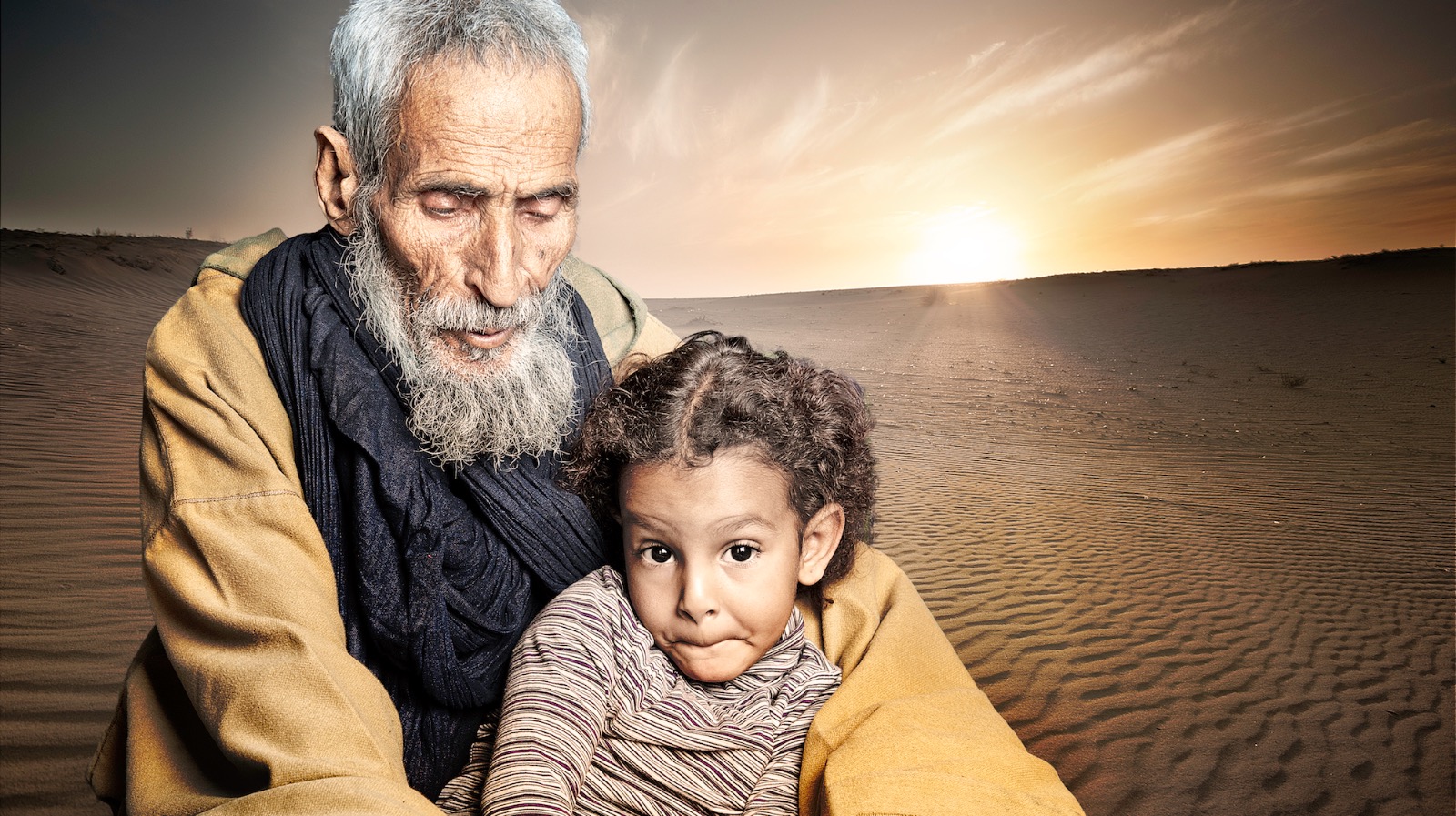 Art has the power to address universal themes in ways that tap into our emotions and enables us to connect with our common humanity, dissolving barriers that often make us feel like strangers to each other.

The connection between arts and human rights is particularly relevant for those Saharawis living under Moroccan occupation. There, the policy to “Moroccanize” the territory has resulted in the systematic suppression and appropriation of the cultural identity and history of the indigenous Saharawis in order to deny their rights and very existence. Every cultural act, therefore, is politically charged and singing a song or reciting a poem that expresses their resistance can have severe consequences.
Sandblast Founder Danielle Smith's 1999 film, “Beat of Distant Hearts: The Art of Revolution in Western Sahara” explores the collective experience of exile, loss and war through the lives and works of poets, singers and painters. The award-winning film, which was selected for The 3 Continents Human Rights Film Festival in South Africa in 2003, offers insight into how these art forms have played a role in the struggle.

Purchase a copy of 'Beat of Distant Hearts' in our Shop.
Similarly, the 2015 film 'Life is Waiting: Referendum and Resistance in Western Sahara' by Iara Lee examines how today's younger generations of Saharawis are deploying creative nonviolent resistance for the cause of self-
determination. In doing so, they have had to persevere against a torrent of conflicting forces. While risking torture and disappearance at the hands of Moroccan authorities, they are also pushing back against those who have lost patience with the international community and are ready to launch another
guerrilla war.

Learn more about and watch this film via the Cultures of Resistance website. 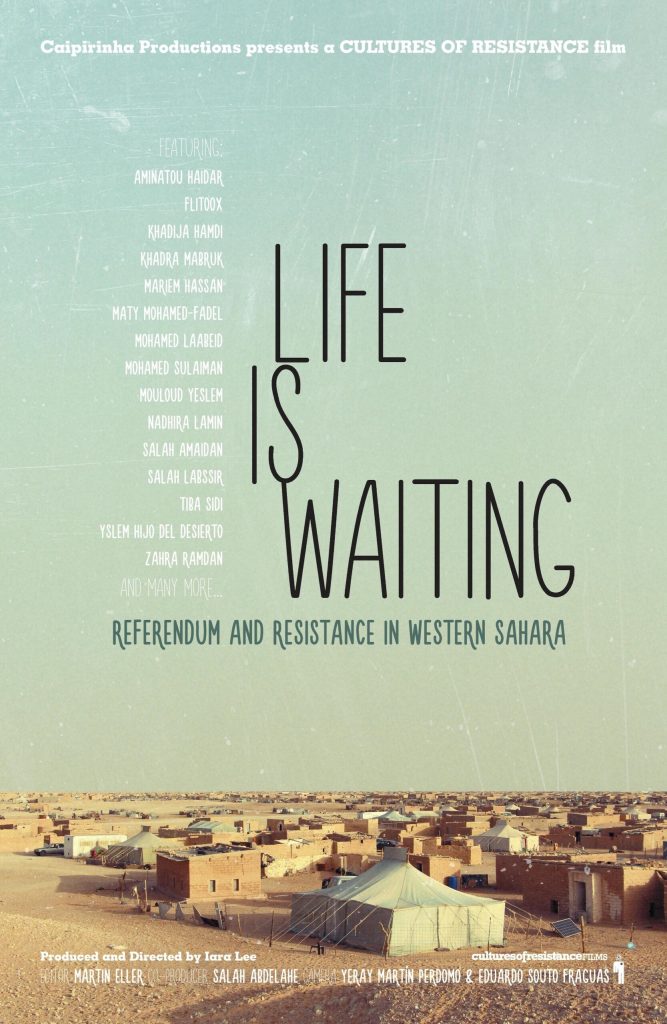 Saharawi music is rooted in the traditions of Trab El-Bidhân and is closely related to the music played in Mauritania, known as El-hawl. This musical style is made up by a complex system of
modes known as bhor (seas) that sing of different themes such as love, religious praise, battle, homage to landscapes, and nostalgia. These modes are traditionally played in a strict and
specific order.

In Mauritania and in many other regions, el-hawl is usually played by the iggâwen (griots), the hereditary praisers and story-tellers, who have been regarded as socially inferior. 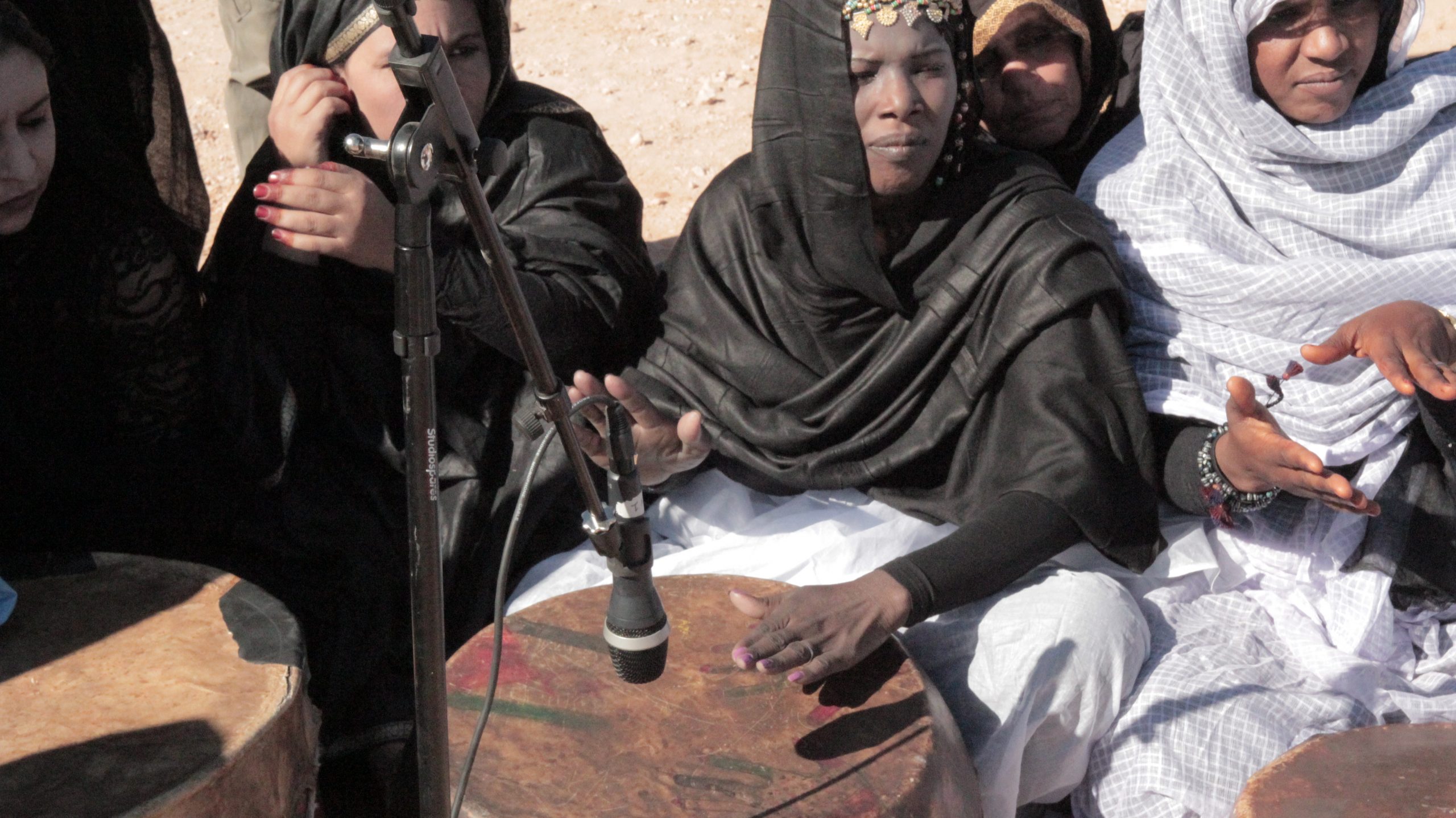 Photo by Ali Meziane
Although admired for their talents, they were looked upon for earning their living from music and praising. Traditionally, the iggâwen (iggiw in singular) played at the service of eminent social personalities and political leaders often developing entire repertoires in their praise. They also played at key social events related to the celebration of birth, marriage and even divorce. The central social pastime of drinking tea in Bidhân society equally provided an inspiring and informal setting for el-hawl to be played.

Unlike the Mauritanian society, however, the Saharawis never developed a griot social group dedicated to playing music. In the Saharawi context, music was primarily a communal activity and a popular expression closely connected to women and the poetry tradition. The main instrument played was the t’bal drum, accompanied by clapping and singing. The Saharawis excelled in medh, the rich spiritual tradition of singing songs dedicated to the Prophet Mohamed. The tidinit, a four-stringed lute, and the aardeen, a calabash harp, played respectively by the Mauritanian male and female griot known as iggiw in Hassaniye, were rarely played or mastered by the Saharawis. 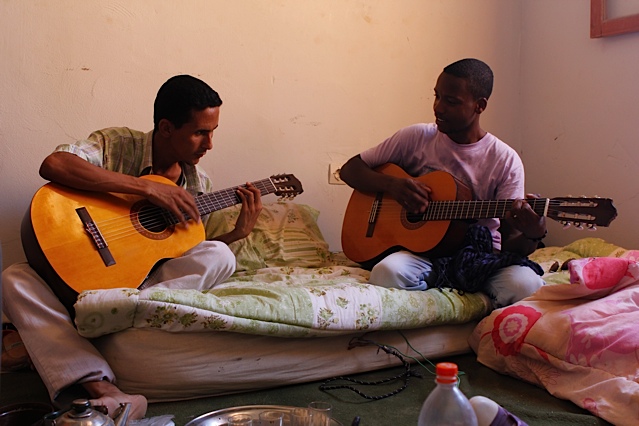 Saharawi music bands and professional musicians only began to appear in the early 70s at the end of the Spanish colonialism. With the rise of the Polisario front, songs played an important role in mobilizing Saharawis to join the Polisario movement and were often sung at large gatherings like weddings and other social occasions to avoid Spanish reprisals.

But it really was once large numbers of Saharawis were forced into exile into the harsh Algerian desert and the refugee camps became the main space where political resistance and aspirations could be freely expressed that that music became harnessed to express the struggle and Saharawi aspirations for nationhood. Over the past four decades, particularly in the diaspora and especially in the refugee camps,
Saharawi music has evolved to reflect the centrality of their cause and the influences of modern instruments. The most famous Saharawi modern revolutionary band of all time has been Shaheed El Uali, named after Polisario founder El Uali Mustapha Sayed.
Shaheed El Uali performing "Never" in Berlin in 1984.
The electric guitar, bass and keyboard synthesizer, in particular, have tended to be preferred over the traditional tidinit and the t’bal drum. Musical modes relating to battle and landscape have developed at the expense of other modes.

Due to multiple influences, the younger generation of Saharawis are increasingly experimenting with and incorporating other music traditions into theirs, especially from the Latin American and hip-hop worlds. Most significantly, the Saharawis have largely succeeded in overcoming the social stigma associated with being a musician. This has been possible because those Saharawis with talent applied it to sing for their cause and not for money, in the early days, thereby making it an acceptable and even noble pursuit.

Today, Saharawi artists are increasingly looking to earn a livelihood through their music. Playing at weddings in the refugee camps is currently one of the most lucrative activities.

Portraits of Saharawi Music is a project by Violeta Ruano, Sandblast's programme manager. It is the result of six months of ethnographic fieldwork in Saharawi refugee camps, in south-west Algeria, during 2013 and 2014. The collection includes a variety of music recordings with the aim of showcasing the rich cultural heritage of the Saharawi community.

The recordings were made over different sessions. These were organised in collaboration with the Saharawi Ministry of Culture, which is responsible for promoting preservation projects in the camps to fight against the disappearance of their culture. Ruano travelled to the five different camps (wilayas) with a translator and met musicians in their homes or the local cultural centres. There was not any particular stylistic focus or constraint; musicians were asked to choose the songs they felt were most representative of traditional and modern
Saharawi culture. As a consequence, this unique collection is a collaborative and eclectic project that portrays the musical diversity of Saharawi culture whilst documenting the history of their struggle for independence. All the songs are sung in the local Arabic dialect, Hassaniya.

You can explore the full collection on the British Library website. 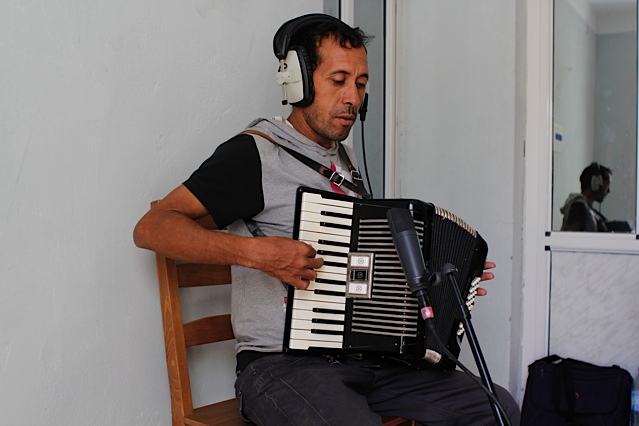 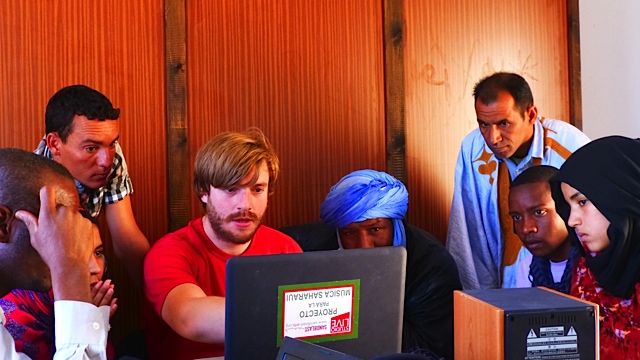 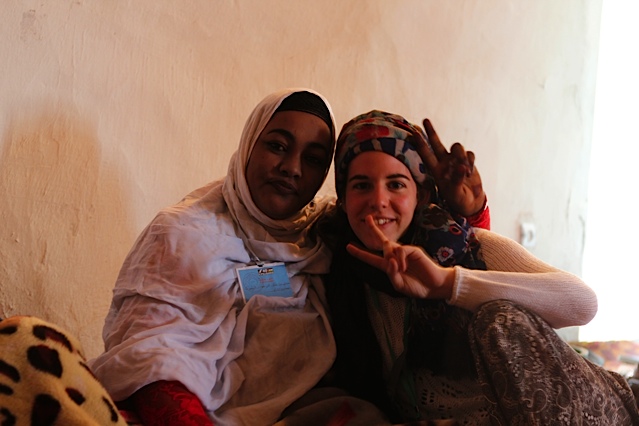 Poetry is undeniably one of the secret weapons of the Saharawi independence cause. This oral tradition has been a key ingredient to express the Saharawi cultural identity, their resistance and their national aspirations, since the early 70s.

It is no exaggeration to suggest that without poetry, especially poetry composed in Hassaniya, the Arabic dialect spoken by the Saharawi, the emergence of the independence movement in 1973, led by the Polisario Front, may never have grown to the mass scale it did. Aiming to liberate Western Sahara from hundred years of Spanish colonial rule by armed struggle, poetry was the movement's other crucial non-violent weapon. And when Spain finally withdrew but left the Saharawis facing yet another invasion and occupation of their land by
Mauritania and Morocco, poetry again galvanised the people to resist.

The Polisario’s visionary leaders understood early on that poetry could unleash the potent emotions needed to mobilise people into action. Also, as the nomadic Saharawis were barely literate at the time, poetry would have been one of the few vehicles able to reach them to transmit the message of the struggle. At large social occasions like weddings the call to arms was transmitted through poetry and through cassette recordings played in cars and taxis.

The messages transmitted called for national unity and the overcoming of traditional social and tribal divisions. In this regard, poetry’s role was transformative, even radical, in the task of nation-building for a new future.

Culture and the arts, more generally, were harnessed to the goals of the revolution: the talents of Saharawi poets were deployed regularly and this gave birth to a new poetic genre known as she’ir multazem, meaning literally, politically engaged poetry.

The impact of these poems was enhanced further by Shaheed El Ouali, who released their first album, Grupo Nacional de Cantos y Danzas Populares, dominated by the sound of the traditional drum (ettabel), handclapping, and the acoustic guitar, which had already entered the Sahrawi music scene through the Spaniards in the final years of colonial rule in the late 1960s.
The most emblematic of its songs was the famous “The Sahara Is Not For Sale” (“Sahara ma timbah”), sung by one of the
most representative Sahrawi revolutionary singer, Um Murghia Abdullah.

Read more about Shaheed El Ouali here.
Watch Um Murghia Abdullah perform 'The Sahara is Not For Sale' at our Sahara Nights event in 2013.

'Settled Wanderers' is a collection of interpreted (Hassaniya to English) poems from the greatest living poets of the Western Sahara, such as Badi, Bayibouh and Al Khadra.
The book offers English speakers, for the first time ever,
the chance to appreciate the power and prowess of
Saharawi poetry in the historical context of this long under-
reported struggle.

In 2013, poet Sam Berkson was invited by the charity Olive
Branch to visit the Saharawi refugee camps as a poet in residence. In March 2014, following a successful crowdfunding campaign, Influx Press raised enough money to send him back to gather and translate some of the contemporary poetry of the Saharawi.

You can purchase a copy of 'Settled Wanderers' in our
Shop. 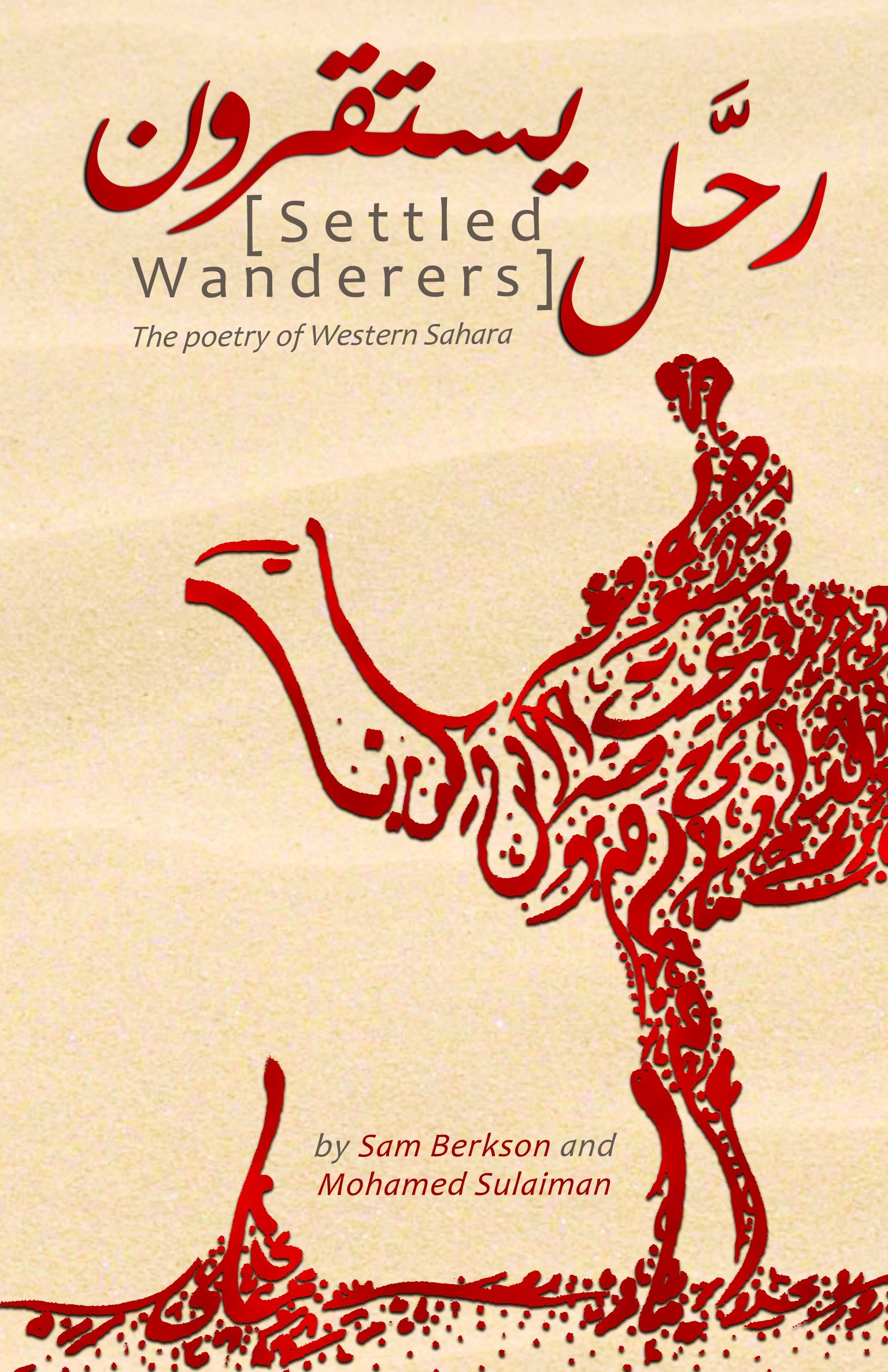 In the Sahara my life is joy,
Milk, dates and anish flowers

I have abundant barley,
Poultry fat,
And the scent of afaag el mazazia.
I do not spend my summer eating elaish
Like the people of the south,
Nor do I search in the rivers of the East
With enbig between my teeth
And the Adraar ploughed by dromedaries.

I eat fresh tender herbs,
Wandering with my dromedaries
Towards El Mutlan, Aftasa and El Erguia.

"He who only sees with the eyes is blind."