Some of the earliest known inhabitants of the Western Sahara region, who are considered ancestors of the modern-day Saharawis, were the Sanhaja Berber. Archeologists have found evidence to suggest that the Sanhaja were long-term inhabitants of the region, perhaps as far back as the Neolithic era. They were instrumental in the trans-Saharan trade that ended up bringing West Africa into contact with the Muslim cultures of North Africa. Between the 11th and 13th centuries successive waves of Arab tribes, known as the Beni Hassan, emanating from the Yemenite peninsula, conquered and Islamised the Sanhaja, giving the name to their spoken
language, Hassaniye, and creating a cultural fusion, which included West African influences introduced through the slave trade. 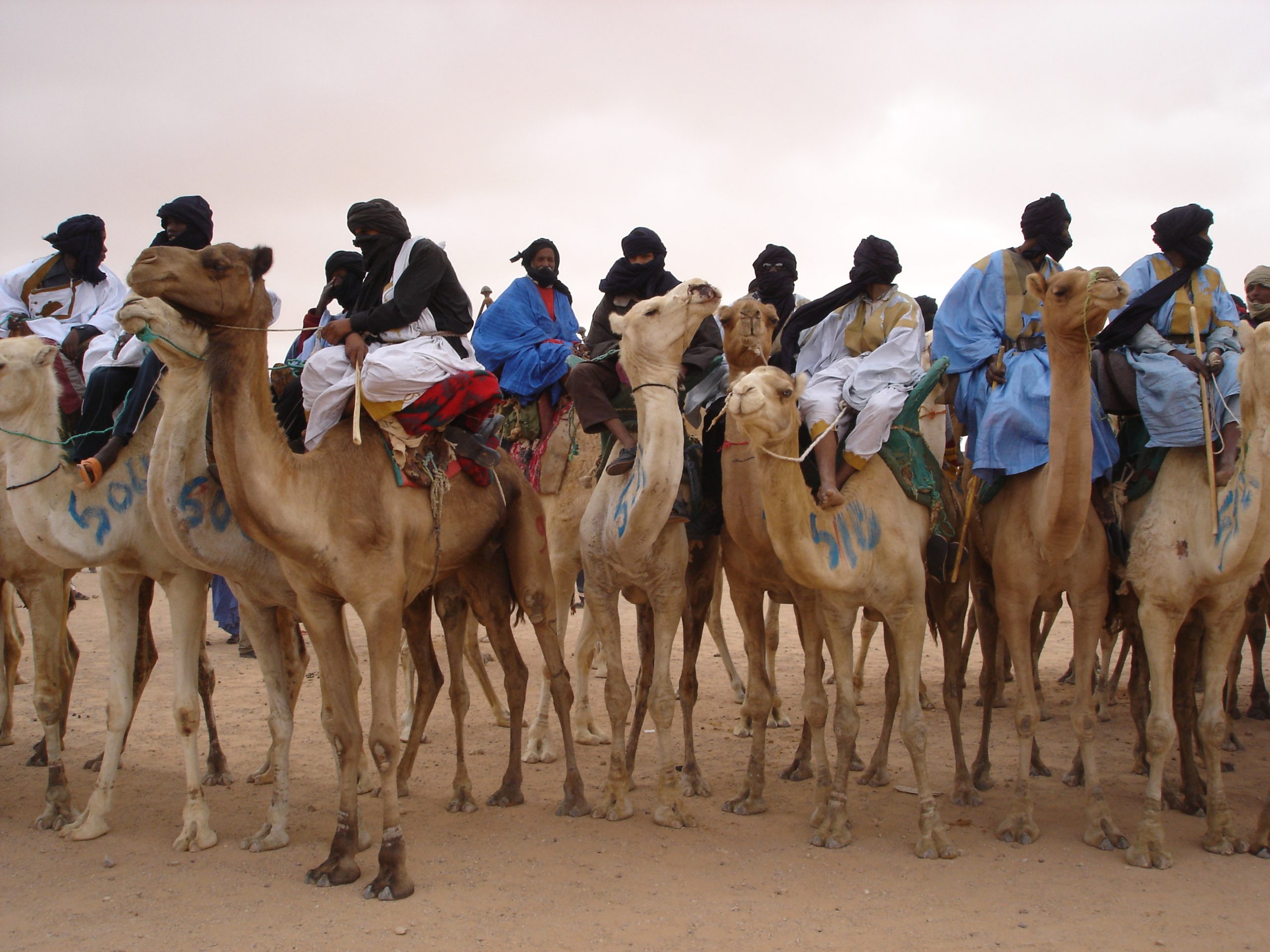 The Saharawi tribes had a strong sense of belonging and connection to the landscape they roamed, particularly the territory known today as Western Sahara. This connection is reflected in Saharawi poetry which has a genre solely dedicated to landscape known as Adtlal.

Today, Saharawi culture and society must be considered from two different perspectives. Under Moroccan occupation, Saharawi culture in Western Sahara has been highly affected by the imposition of Moroccan traditions and values. On the other hand, 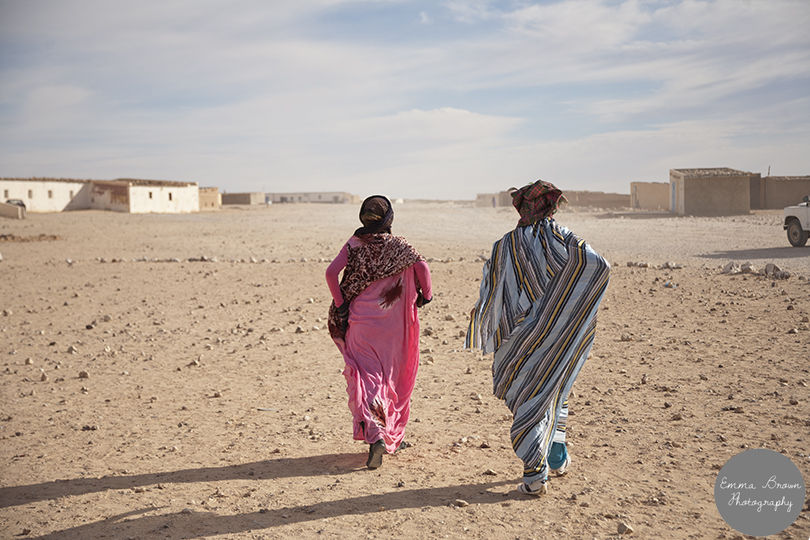 Saharawis living outside of Moroccan occupation in SW Algeria have attempted to maintain a distinct Saharawi society and cultural identity under extremely hard conditions. The influence of diverse cultures, especially Spanish, Cuban, and Algerian, has been particularly significant as many Saharawi children
and youth have had to spend long periods of time studying abroad.

Saharawi women have always enjoyed freedom and respect. In their previous nomadic way of life, they performed important social roles, such as family educators and managers of their encampments. They were able to re-marry without stigma, and were integral to cultural and spiritual transmission. Because men were often away with their animal herds, women were also in charge of hospitality towards guests, one of the most important traits of Bidhan culture.

Although their autonomy was threatened during the Spanish colonial rule, it was regained during the Saharawi revolution of 1975. During the first years of exile and war, Saharawi women were the primary community-builders within the refugee camps, supervising the national administration, and the education and health systems while the men were fighting on the frontlines. 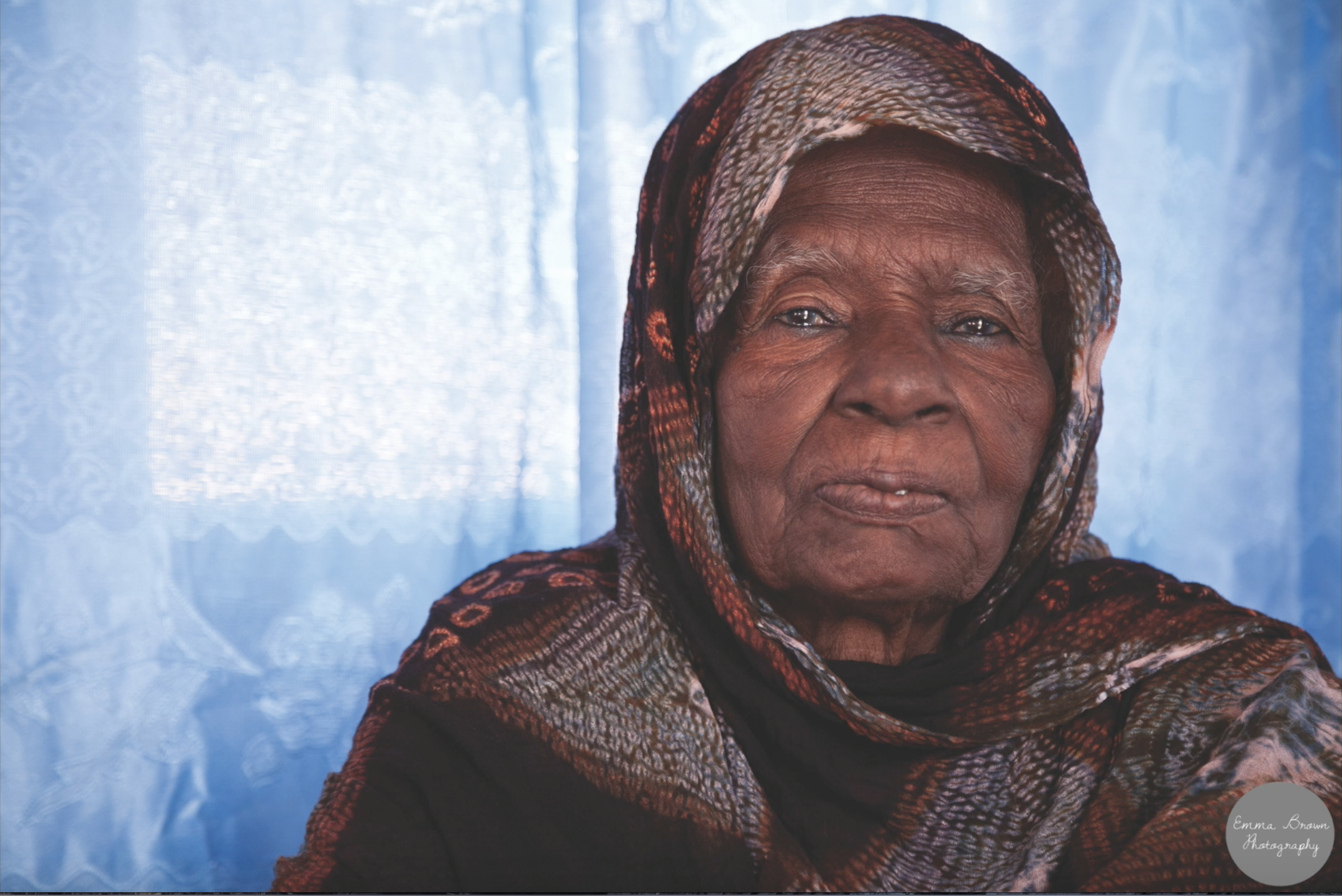 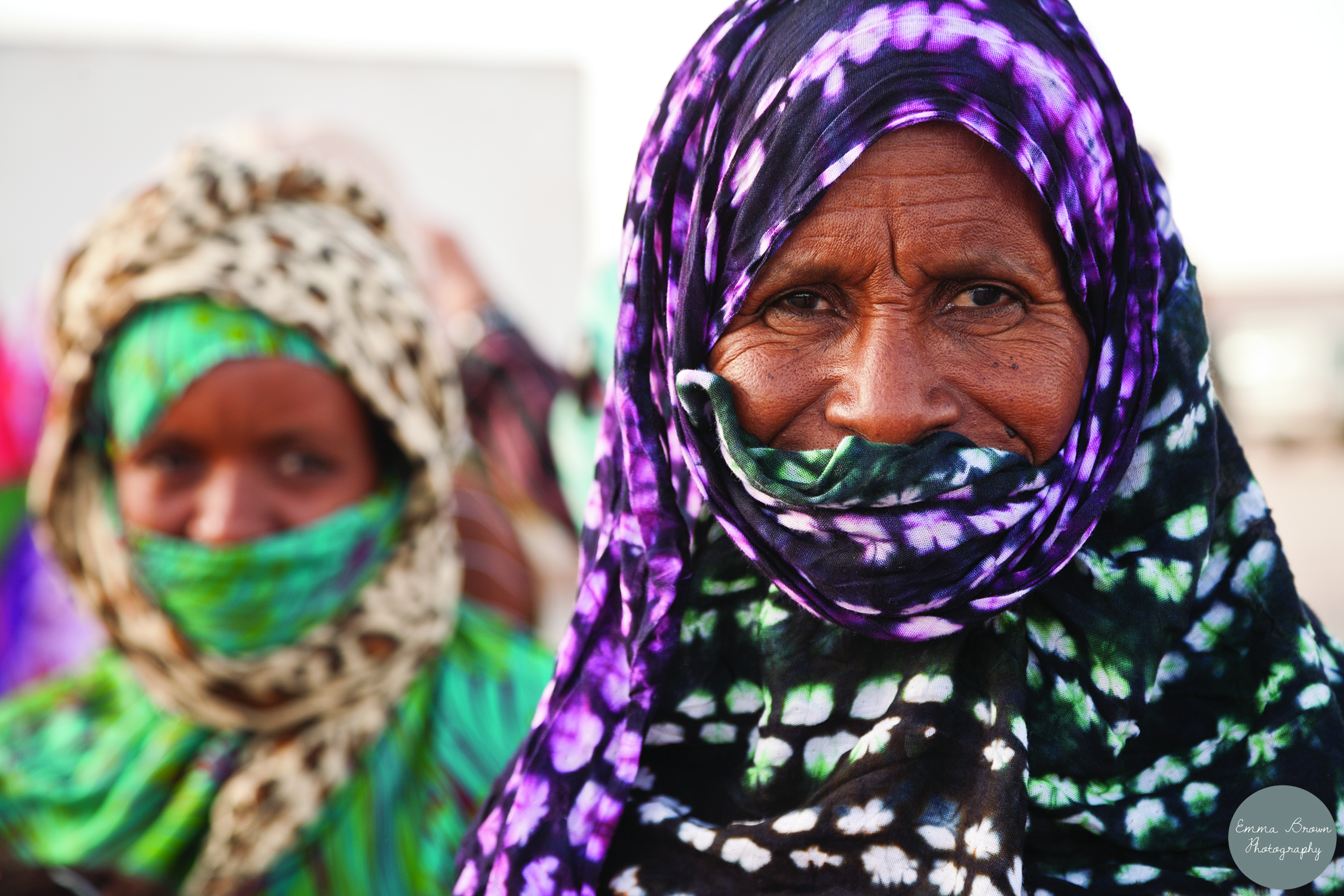 Under Moroccan occupation, Saharawi women have consistently supported the Saharawi right to self-determination through peaceful activism. One of many outstanding examples is the story of Aminatou Haydar, who led the 2005 Saharawi intifada and has been imprisoned and tortured in several Moroccan jails.

In the refugee camps, the Saharawis speak Hassaniya on a daily basis, but Arabic and Spanish are the official languages. Spanish is also widely spoken due to the large number of Saharawis who have studied in Cuba and Spain. In recent years, more and more Saharawis are learning and using English.

In exile, women have assumed important roles at the political, social, and familial levels. Currently, there are three female ministers in the Saharawi government, and the vice-president of the African Union is a Saharawi woman.

"In the land of the Saharawi, where culture is faithfully preserved in the memory of the people, where the libraries are human, when an old person dies, a library dies with him."
- Bahia Mahmud Awah, Saharawi writer and poet

The Saharawis speak Hassaniya, an Arabic dialect that got its name from the Beni Hassan tribes that invaded the region in the 11th and 13th centuries and conquered the local Sanhaja Berber tribes. In the context of the contemporary struggle, Hassaniya has become an important means of expressing Saharawi identity and resistance.

As a traditionally oral culture, sharing stories, fables, poems, and songs in Hassaniya has been part of Saharawi society for centuries, and is often a part of the traditional Saharawi tea ceremony. Through oral accounts, the Saharawis have documented aspects of their daily life and their nomadic travels, as well as preserved their collective historical memories.
In the refugee camps, the Saharawis speak Hassaniya on a
daily basis, but Arabic and Spanish are the official
languages. Spanish is also widely spoken due to the large number of Saharawis who have studied in Cuba and Spain. In recent years, more and more Saharawis are learning and using English.

However, in the parts of Western Sahara occupied by Morocco, a former French protectorate, the Saharawis are taught French and Arabic at school. The Moroccan dialect of Arabic, "Darija" , is dominant in most public places and the new generations of Saharawis are gradually losing their knowledge of Hassaniya. 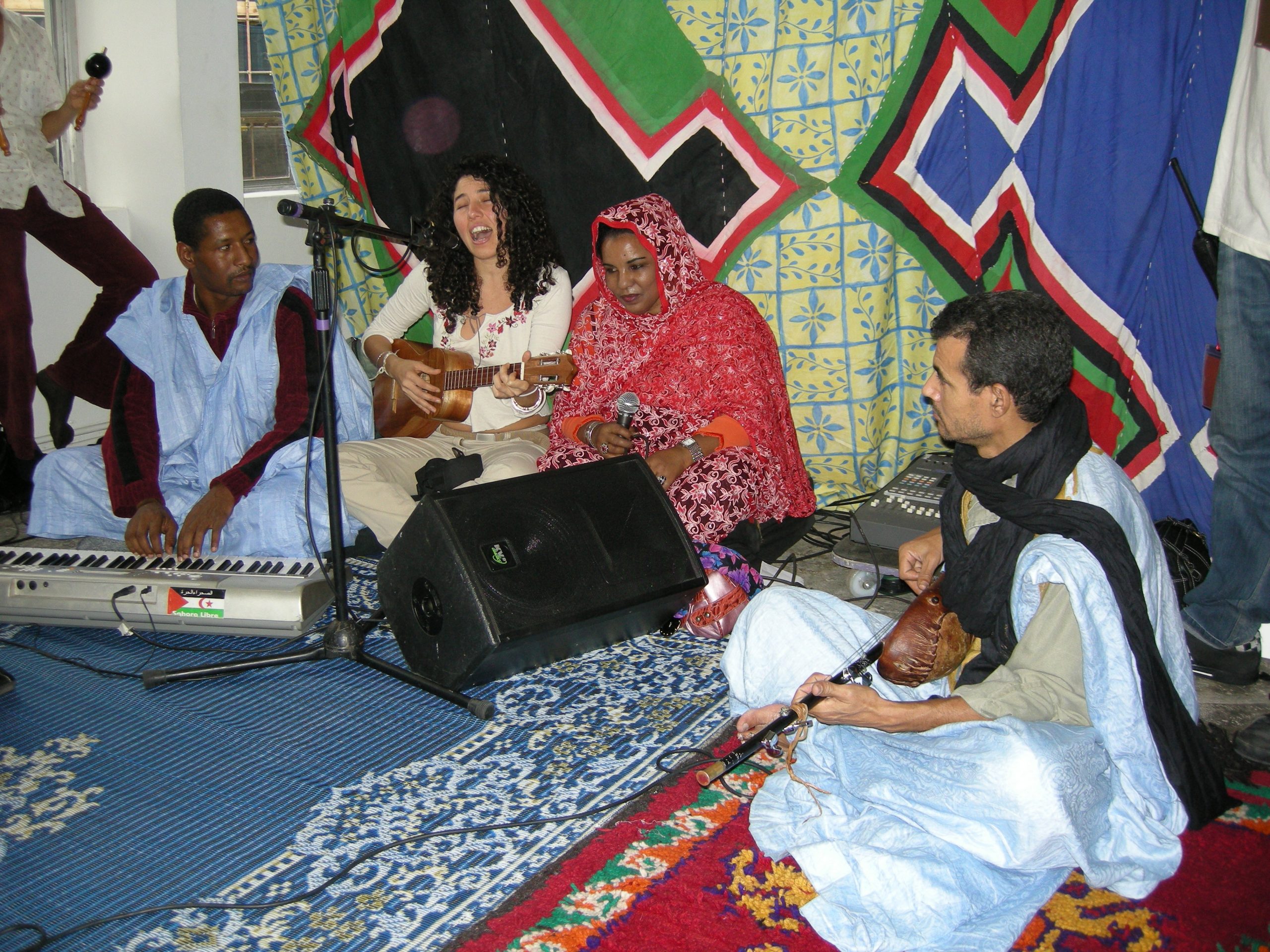 The Saharawi tea ceremony is one of the most important rituals of Saharawi culture, and is central to their understanding of hospitality. The tea brewing is a central activity in gatherings. Saharawis usually drink three small cups of strong green Chinese gunpowder tea during the tea ceremony, often adding mint to the second and third cups. A Saharawi saying describes each cup the tea like a different aspect of life: "the first cup tastes as bitter as life, the second as sweet as love, and the third as mild as death. " 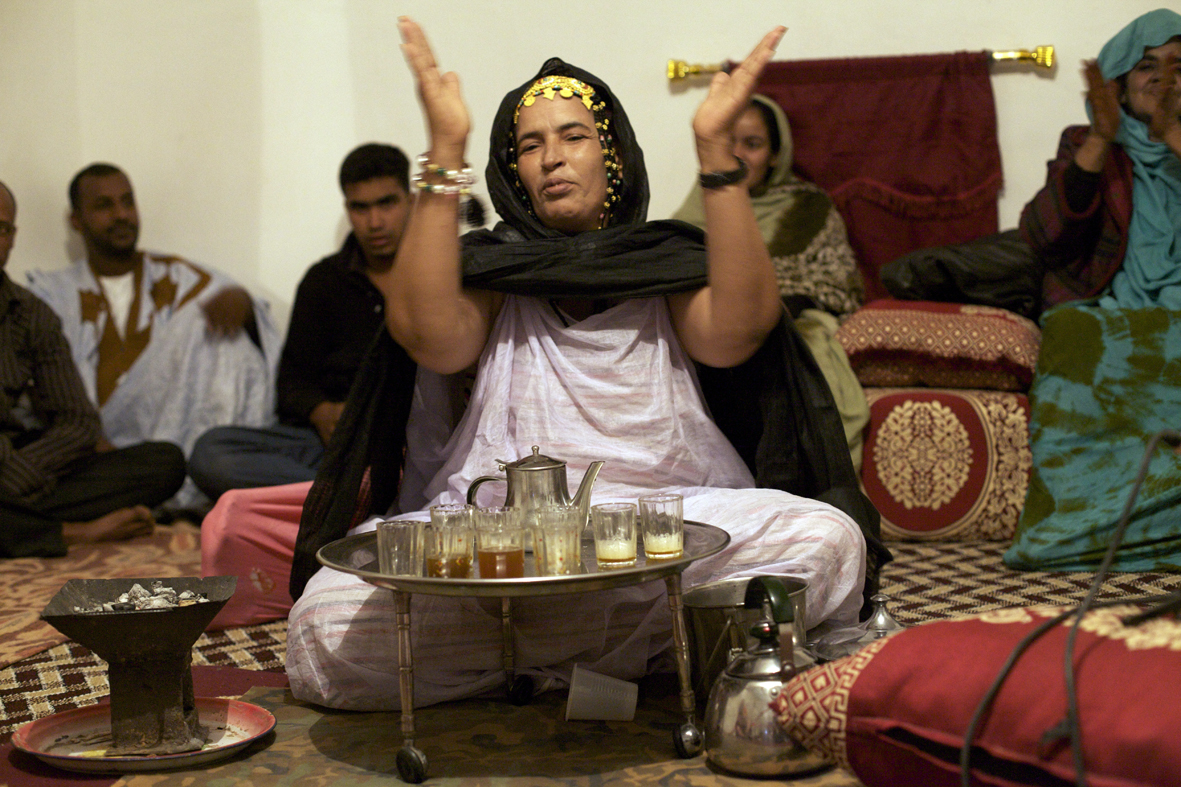 In the 18th century, Western Sahara was understood to be a haven for trade, as a gateway to the Great Sahara and North Africa. It is through trade with the British that the potent Chinese gunpowder green tea was introduced to the Saharawis. The beverage soon became popular among the indigenous people of Western Sahara and the original ceremony was adapted to the long journeys
through the desert on camel back. As tea and sugar cannot grow in the region and the Saharawis needed to trade for these luxuries, they were considered precious
items, only offered initially to honour very special guests.
But over time the generous spirit of the Sahrawi prevailed
and the tea ceremony became obligatory and a central
aspect of hospitality offered to all their guests.

Calligraphy of tea ceremony by Mohamed Sulaiman,
Saharawi artist, Smara refugee camp, SW Algeria
A tea ceremony requires a teapot called "abarad" or abrig made of tanmint (a type of metal); a tray, "tabla", made of red or yellow bronze; bowls for sugar and tea, named "kuntiya" and "a’msar;" an air pump, "rabuz", to keep the fire alive; charcoal, "jmaar", for the fire; and, of
course, a great gathering of people called a "jmaa". The perfect tea experience has 3 J's.
Jmaar (the charcoal), Jma3 (the gathering) and Jaaf (lasts long).

"Sahrawi child take hold of a paper and pencil
and learn literature, math and science.
Sahrawi child, sit closely by your elders
and listen carefully to the wisdom;
this is the way which in the future will come to your rescue."
- Agaila Abba Hemedia, Sahrawi Writer and Poet

The Saharawi oral tradition encompasses poetry, storytelling and the proverb. Proverbs are an integral part of educating children and reminding adults of morals and values.

Watch the slideshow below, produced by photographer Emma Brown of Olive Branch Arts, for
examples of Saharawi proverbs.
Desert Voicebox students tell us about their
favourite proverbs.
Saharawi elders describe the importance of
proverbs.
Prev Page
Next Page

"To you reach an oasis you must
first cross the desert."